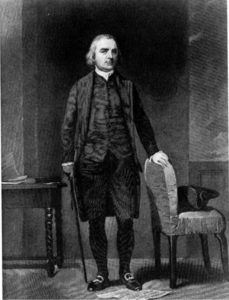 Known as the Firebrand of the Revolution, the Father of the American Revolution and the Patriarch of Liberty. He had deep Christian Convictions and was described as conscientious, a noble genius within, more than ordinary inflexibility of character and purpose, great sincerity, simplicity, interesting, instructive, concise, impressive, inflexible firmness, patriotic ardor, full of hope, resolute and eager for action. His contemporaries nicknamed him "the last Puritan" for his views; in 1788 he would write in his diary regarding the federalist and anti-federalist factions, "Neither Interest, I fear, display that Sobriety of Manners, Temperance, or Frugality-among other manly Virtues-which once were the Glory and Strength of our Christian Sparta on the Bay..."

There have been many that have written Biographical descriptions of Samuel Adams. The links to several are in the Resources section. What is most important to look at for our time in history is that Samuel Adams was a leader who was learned in the details of history and liberty. He was recognized for his ability to communicate effectively with the quill (the pen) as well as an orator; "he was eminently fitted for the stormy times in which he lived. Yet no man could address himself more powerfully to the passions, than he did, on certain occasions. As a statesman, his views were broad and enlightened; what his judgment had once matured, he pursued with inflexible firmness, and patriotic ardour. While others desponded, he was full of hope; where others hesitated, he was resolute; where others were supine, he was eager for action. His circumstances of indigence led him to habits of simplicity and frugality; but beyond this, he was naturally averse to parade and ostentation."1

"If," wrote John Adams, in 1819, "the American Revolution was a blessing, and not a curse, the name and character of Samuel Adams ought to be preserved. It will bear a strict and critical examination even by the inveterate malice of his enemies. A systematic course has been pursued for thirty years to run him down. His merits and services and sacrifices and sufferings are beyond all calculations." The interesting facts are that going back 100 years to our present history, there have been groups that have been out to defame all the Founders of our nation. Samuel Adams was first in Liberty and First to be vehemently attacked. He was the first to be declared Traitor to the Crown and had a �500 bounty put on his person. He knew that the sentence for Treason was to be stripped of their clothing, then taken to the scaffold and hanged for a short period, but only to cause strangulation and near-death; then disemboweled, and normally emasculated. Those still conscious at this point might have seen their entrails burnt, before their heart was removed. The body was then decapitated, signaling an unquestionable death, and quartered (chopped into four pieces). Each dismembered piece of the body was later displayed publicly, as a warning to others. Who today has a love for Liberty and America to knowingly stand firm in ones beliefs? Of all the Patriot Founders, only Samuel Adams and John Hancock would never have been offered a pardon if the outcome of the Revolution turned out different.

Samuel Adams life foundation began with his firm Christian beliefs. His mother "was a women of severe religious principles, and she early imbued her children with reverence for the Christian virtues which she practiced. To the scrupulous attention of his parents to devotional subjects must have been greatly due the religious turn of mind which was a prevailing trait throughout the life of the son. His father had been for some years a deacon of the Old South Church."2 Samuel was of a strong and inquiring mind. He was naturally observant and of quick intelligence. At one point, he was going to study to be a minister. "The investigation of theology had much occupied his thoughts, and had doubtless been quickened by the advent of Whitefield, who visited Boton at this time. But this gradually gave place to an irresistible love of political subjects, then beginning to engross popular attention. Though, in accordance with the wishes of a pious father, he had endeavored to fix his mind upon the ministry, for which he had been designed, his inclinations wandered to that more exciting arena in which he hoped to find the spirited contests better suited to his ardent and active temperament."3

In the end, Samuel studied to become a lawyer but his mother persuaded him to go into a more noble business environment. Professionally he was not very successful. His resume would read:

"The desire for pecuniary gain, and the excitement of competition in trade, had no attraction for him, and probably some of his more methodical acquaintances considered hi at this time as a very unpromising and thriftless character, upon whom his father had uselessly expended the cost of his college education. Yet he was no idler. He was too nervously and actively constituted for indolence. His mind was always employed, though on subjects then regarded as unprofitable...Mr. Cushing replied...that his whole soul was engrossed by politics, to which all other subjects were necessarily subservient."4

Samuel Adams life was additionally impacted early on with a wise understanding of how distant political decisions affect the lives of individuals. At seventeen, he saw his father fundamentally ruined financially when Parliament made private banking unlawful in the Colonies. The Sr. Adams, Samuel's Father, was the major share holder in a private bank in Boston. This action caused young Samuel to question the authority of the mother country. At eighteen in 1740, he received his degree of Bachelor of Arts. During his undergraduate studies, he entered into a debate with classmates where he took the subject of "Liberty." Later, for his Master's Thesis, at age 22, he gave the argument "The Doctrine of the Lawfulness of the Resistance to the Supreme Magistrate if the Commonwealth Can Not Otherwise be Preserved"5 His study of world history, the Bible and other philosophical writings, including Algernon Sydney, gave him a clear perspective about individual and national Liberty.

During his time in college, from age 14 and graduating with a Masters at 22, he used the stipend that his father gave him to publish political papers. He became a youth that the Governor and the Tory's had a watchful eye on for he spoke treasonously at this early age. By the time Samuel was 26 he was a primary contributor to "The Public Advertiser," a circular that became a weekly publication. The purpose and theme that resounded was "...the sentiments on popular liberty, the right of "remonstrating grievances," and the views which at that distant period he had obtained of the rights of the citizens as compared with the divine right of kings..."6 He viewed politics from the perspective of the great Roman and Greek historians. From this study of the ancients perspective of Liberty his great understanding of this basic right given by Heaven formed the words in his work "Loyalty and Sedition," essay published in The Advertiser (1748).

From this time until his death in 1803, Samuel Adams would challenge every interloper, cabal and enemy of Liberty. He even stood against the Constitution when originally submitted to the states since he believed that it did not sufficiently secure the rights of the States or individuals.

This site will continue to reference the many biographies but more importantly, the 21st Century Alter-ego of Tom Niewulis, Jr. will bring back the words and spirit of Samuel Adams.

Not unlike the time of the founding of the United States, the nation is in dire need of the Firebrand of the Revolution. The problems that the Founders, especially Samuel Adams, predicted would happen to the nation if the national government became overly centralized are upon us now. They feared that the individual States would be subsumed by the federal government and lose their perspective as well as their sovereign rights. Over more than a century, designing men and women have attacked the intent of the Founders regarding our Constitution and designed form of government. Samuel Adams not only led the intellectual arguments for Liberty but was able to stimulate the passions of patriots for true freedom through the pursuit of individual rights and the rights of the States. (Read more)

Have Mr. Adams speak at one of your events, church, school or organizations meetings.